In the 17th century Malacca was a stopover for the big ships of the Dutch Eastindian Company (VOC) on their way to Batavia and the Maluku spice islands. They could take in fresh water, meat and vegetables and also there were opportunities for trade. There are still several (mostly restored) buildings from that period e.g. the church and the 'stadthuys' (town hall). In 2008 the United Nations have decided to declare Malacca a world heritage place and so Malaysia got some extra money to restore the historical buildings and sites of the Portuguese, the Dutch and the English period. In the 'stadthuys' is an extended and interesting museum where a lot of 'souvenirs' of the VOC and Holland have got a place.

In Jonkerstraat you walk along small old buildings with mostly shops on the ground floor. At Low Yong Mow, one of the many Chinese eateries we have a breakfast with dim sum's, these are filled packages with delicious pork or shrimp meat and vegetables that are steamed in big round baskets. With it you drink jasmine tea as much as you want. Very interesting is the museum of Cheng Ho, the great Chinese seafarer who by order of the emperor of China from 1406 on with a very extended merchant fleet discovered and charted the world. In seven journeys he visited many countries, did business and started diplomatic ties of friendship and trade. There are more and more suspicions that Columbus must have had sea maps that have been drawn by cartographers engaged by Cheng Ho and further traded on. In Malacca Cheng Ho had established a large depot for his trade goods and in between his sea travels he must have lived and done business here. From the hill you have a nice view over the city and strait and in the ruins of the old St. Paul's church you find a collection of tombstones of Dutch citizens of the 17th century. At the foot of the hill there is one gate left of the fortress that the Dutch have build in the time of the VOC.

One day sailing to the north we meet bad weather and flee into Admiral marina near Port Dickson. The marina is part of an impressive apartment complex and has a stylish colonial clubhouse with a restaurant and bar. And we can use the swimming pool for a refreshing dip! There is not a lot of wind along the coast northbound and with a stop over in Port Klang, the busy harbour of Kuala Lumpur, and an overnighter with a lot of lightning, we reach Penang island.

You get a good impression of the new and grand developments in building when you enter the very spacious and luxury Puteri Harbour marina. In the background you see the new State administration offices. The modern 'marina clubhouse' is air conditioned, has a roomy reception with very friendly staff and on the first floor you'll find an extended maquette with the future developments in the area. A beautiful garden with palms in front of the clubhouse offers shadowy patches and the views from the terrace of the restaurant are the best.

And then the surprise when we discover there are three more yachts with (ex-)Dutchies from which two are our friends Hans and Fien from 'Pelikaan' of Sydney! We have a sushi-party on board 'Alexandra' and get to know the nice couple Rob and Jacqueline of 'Mary Eliza'. When there is a request from the marina management to join a small sail pass, we decide to go together as Dutchies and decorate both the boat as ourselves. Hans of Fien makes a top impression with his Thai cap and also Fien succeeds in a very subtle hair covering. Rob turns out to be an excellent trumpet player and it doesn't take long that a canon of real Dutch songs sounds over the Johor Strait. Also Henk and Loes of 'Gentle Lady' who emigrated 50 years ago to western Australia, join in enthusiastically. Coming back into the marina Rob starts with some international songs and also on board the other boats we hear singing and see them clapping. Great fun everywhere!

Another evening we have a musical session by several yachties and also Rob is playing some real good tunes there. The known songs are joined in by all of us and dancing is very popular under yachties. The staff of the marina has started a tasty BBQ and again we have a very good time together. On November 12th we start with a serenade of Dutch birthday songs on trumpet and in the evening we have a good party on the jetty next to 'Alexandra'. The upside down dinghy we can use as a table and Hans is like a magician when he suddenly pours light into a few metre of plastic hose by which the area is cosy lit. Several shipcooks succeeded to offer some fine bites to accompany the drinks.

In Danga Bay near Puteri marina in the south of Malaysia we have some interesting presentations about sailing in Malaysia and exhibitions about the future developments in the state of Johore. Sometimes you get the impression of the Dubai area here: futuristic buildings for working and living: if anybody is interested in investing in a luxury appartment, you should do here and now!

In the evenings we were offered very good buffets with all kinds of local food, but the first night we were happy to have our umbrella's with us while the rain is pouring down. Happily we could place tables and chairs on the roofed veranda's, so we still could enjoy the fine food. The next evening the weather was working with us and all the dancing and performances worked out very well. Especially the finale where all the yachties were invited to join the professional dancers was a great happening together.

We join the tour in and around Johore Bahru. The Sultan Abu Bakar mosque is a fine piece of architecture build between 1892 and 1900 with a lot of detail as is the State Secretariat building with the 64-metre-high square tower overlooking the city centre. Everything you want to know about the growing and culture of pineapples you'll find in the special 'Muzium Nanas'. Then we find ourselves on the most southern tip of Malaysia and SE-Asia and we are overlooking the Johor and Singapore Straits with always a lot of boats at anchor. The new Secretariat Buildings and Administrative Center of the State Johore are planned in a new area where there is room enough to build as if all building have to be palaces. Very impressive is also the monument where you can read the history of the southern part of Malaysia.

A short flash back to our entering of Singapore on October 30th. In the early morning we see the contours of Singapore city and the anchored tankers and containervessels. There is a lot of activity on the oil rig platforms at the beginning of Johor Strait. On the northern border (the Malaysian side) Singapore has set up a fence and we see signs and hear tapes with the message not to enter the island illegal. If Singapore would allow all people that are interested to come and live there, the island the population would almost double and the island is already too small for the recent inhabitants.

We exchange our Asia airmiles for a ride with the new big wheel in the middle of Singapore. The recently placed Christmas decorations make the streets festive. We are quite lucky with the weather during our airtrip: it is not raining but there are dark clouds hanging around. Just before we enter the cabin of the wheel with 8-10 other visitors we get an audioguide that corresponds with a map and the area we can see with the most important buildings and higlights of Singapore.

Very slowly our cabin rises and we see the sea and the different area's. Singapore is the 'lion city' and the 'merlion' is the symbol of Singapore, a statue half mermaid and half lion. In the new harbour there are many buildings and works under construction. Interesting is the open air stadion where the tribunes are on the land and the football field is on a big pontoon in the water. We've heard that there is also a pontoon with tenniscourts that can replace the footballfield pontoon.

In the end we get a good sight on the 'dourians', the two new theatre complexes in Singapore. The dourian is a tropical fruit with a special scent (some say they stink) and special taste (some call it heavenly). With these special shape and look Singapore hopes to get attention to her theatres like the Opera House in Sydney and the Stopera in Amsterdam. The 'spikes' on the dourians are also very practical sunshades on the side and roof of the buildings. 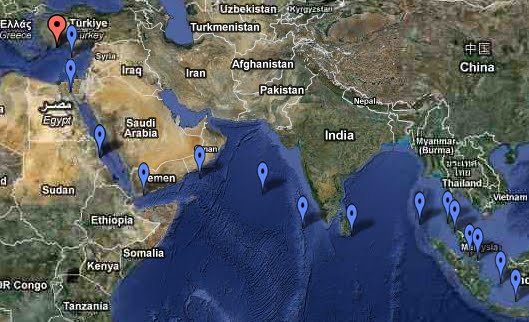 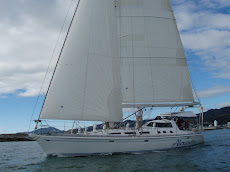